Introducing the Geography of Kenya The black color symbolizes majority of the population, red for the blood shed during the fight for freedom, green for the country’s landscape, and white to symbolize peace. The shield and two spears symbolize the defense of the things mentioned. 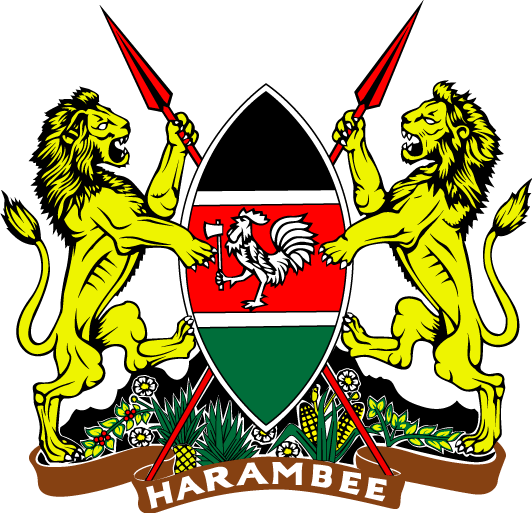 Kenya’s coat of arms features two gold lions, one on either side of a shield with two crossed spears. The lions symbolize Kenya’s wildlife and the courage of the people of Kenya to defend their country. The shield (which bears the colors of the national flag) and the spears symbolize unity and defense for freedom. The rooster holding an axe while moving forward portrays authority, the will to work, success, and the break of a new dawn. It is also the symbol of Kenya Africa National Union (KANU) party that led the country to independence. At the bottom is the national motto, ‘Harambee’, which signifies the spirit of cooperation or pulling together. In the background is an outline of Mt Kenya while in the foreground is images of Kenya’s agricultural produce, including coffee, pyrethrum, sisal, tea, maize, and pineapples. A scroll containing the motto, Harambee, supports the coat of arms.

Location of Kenya
Kenya is located in East Africa. It is boarded by Tanzania to the south, Uganda to the west, South Sudan to the northwest, Ethiopia to the North, Somalia to the northeast, and Indian Ocean to the southeast. Kenya’s land area covers 581, 309 km2 (224, 445 sq mi), which is equivalent to five times the size of Ohio. The country is named after Mount Kenya, a significant landmark and second among Africa’s highest mountain peaks. Kenya’s territory lies on the equator. Globally, it lies between latitudes 4o 30‘N and 4o30‘S, and longitudes 34oE and 42oE. 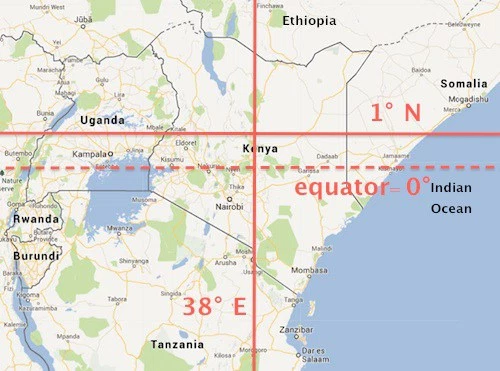 Location of Kenya using Latitude and Longitude
Following the adoption of a new constitution Kenya is administratively divided into 47 counties that are semi-autonomous units of governance, similar to the states in the U.S. The counties are governed by elected governors and operate independent of the central government.

Under the old constitution, Kenya comprised of eight provinces each headed by a Provincial commissioner centrally appointed by the president. Kenya’s capital city is Nairobi. People of Kenya
The country has a population of approximate 47 million people, with 49.9% being male and 50.1 female. Kenyans can be divided into different ethnic and linguist groups. It has about 40 ethnic groups who speak a variety of mother tongues. While no ethnic group constitutes a majority of Kenya’s citizens, the largest ethnic group, the Kikuyu, makes up only 22% of the nation’s total population. The five largest – Kikuyu, Luo, Luhya, Kamba and Kalenjin- account for about 70% of the population. The main languages spoken are English Swahili, and a variety of mother tongues based on the various ethnic groups. The main non-indigenous ethnic minorities are Arabs and Asians. According 2009 census, 82.5% of Kenyans identify themselves as Christians, 11.1% as Muslims, and 1.6% as Traditionalists. More information can be found on the country page for Kenya .

Climate
Kenya lies on the equator and therefore doesn’t experience winters. The climate varies by location, from mostly cool to always warm/hot. Climatic conditions range from the tropical humidity of the coast through the dry heat of the hinterland and northern plains to the coolness of the plateau and mountains. Despite Kenya’s equatorial position, Mt. Kenya is always snowcapped. The North Eastern regions along the border with Somalia and Ethiopia are arid and semi-arid areas with near-desert landscapes. The coastal temperature averages 27°C (81°F). The capital, Nairobi, at 1,661m (5,449ft), has a mean annual temperature of 19°C (66°F); at higher altitudes of about 2,740m (9,000ft) the average is 13°C (55°F), while the temperature of the northern plains range from 21° to 27°C (70–81° F). Kenya’s seasonal variations are distinguished by duration of rainfall rather than by changes of temperature. The climatic seasons can be grouped into two: Dry and wet season
Dry season
The dry seasons are generally from June to October, and from January to mid-March. February and March is the hottest period while July and august are the coldest months. Temperatures vary significantly per region and with their difference in altitude. Daytime temperatures are usually around 23°C/73°F at higher altitudes like mountainous areas, and 28°C/82°F at lower altitudes like the coastal areas. During the dry season the sky is clear and days are sunny. Early morning temperatures at higher altitude are typically 10°C/50°F.
Wet season- November to May
During the wet season daytime temperatures are between 24°C/75°F and 27°C/81°F at higher altitudes. At lower altitudes daytime temperatures are more consistent and remain around 30°C/86°F. During this period most regions of the country received ‘short rains’ and ‘long rains’. November and December is a period on unpredictable short rains, which last for about a month. The country receives long rains in March, April, and May. During this period it can rain on daily basis although rarely the whole day. Average annual rainfall varies from 13cm (5in) a year in the most arid regions of the northern plains to 193cm (76in) near Lake Victoria in western region. The coast and highland areas receive an annual average of 102 cm (40 in). However due to climate change, annual rainfall patterns are becoming less easy to predict. 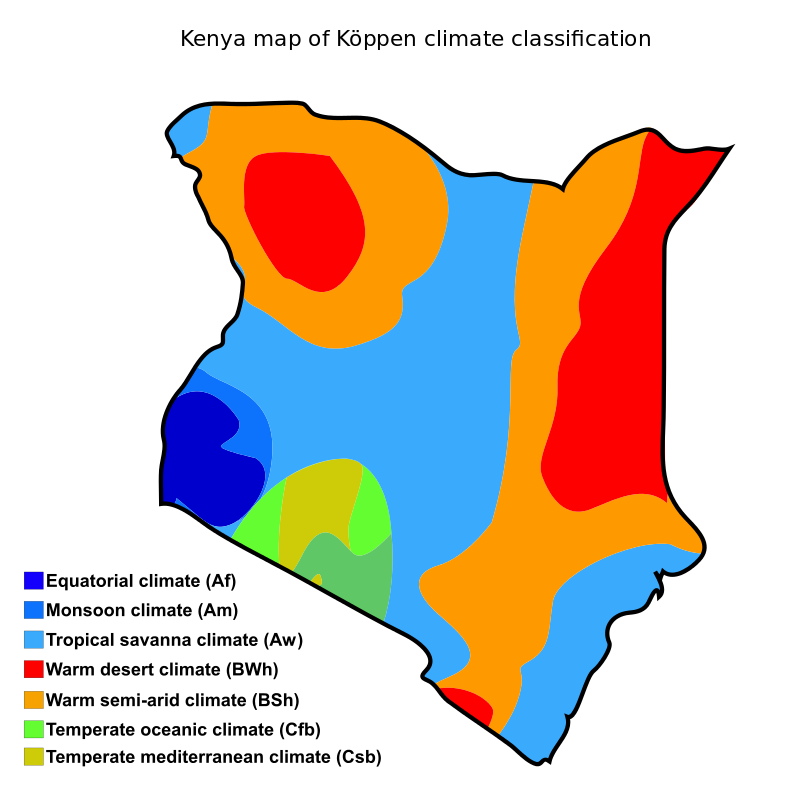 Vegetation
The vegetation in Kenya varies widely depending on the climate and soils of a specific area/region. In the coastal region, coconut trees flourish with occasional mangrove swamps and rain forest. The vast plains of the hinterland and the northern regions are covered with grass, low bush, and scrub. More arid regions have grass dotted with thorny trees while the highland areas are in parts densely forested with bamboo, the predominant trees being African camphor, African olive, and pencil cedar.

1. Agriculture
Agriculture is the backbone of the Kenyan economy, contributing about 25% of GDP. About 70% of Kenya’s working-age population work at least part-time in the agricultural sector, including livestock and pastoral activities. Over 75% of agricultural output is from small-scale, rain-fed farming or livestock production. About 75.6% of Kenya’s population lives in rural areas, and majority practice small-scale farming of no more than two hectares (about five acres) using limited technology. The main agricultural export products include Tea, coffee horticultural products, and fish. Kenya is Africa’s leading tea producer, and it is the world’s fourth largest tea producer after India, China, and Sri Lanka. Black tea is Kenya’s leading agricultural foreign exchange earner. The tea industry is divided between small farms and large estates. Coffee is Kenya’s third leading foreign exchange earner, after tourism and tea. Similar to the tea sector, coffee is produced on many small farms and a few large estates. On the other hand, more than ten percent of Kenya’s export value is generated from cut flowers and vegetables. It is the world’s 3rd largest exporter of cut flowers. The vegetables include green beans, onions, cabbages, snow peas, avocados, mangoes, and passion fruit. 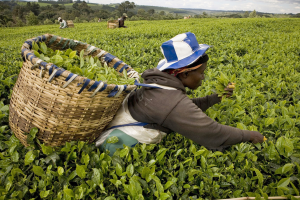 Kenya is abundantly blessed with diversity in wildlife. Wildlife is the biggest attraction for visitors and it is the second largest source of revenue after agriculture. The main tourist attraction is photo safaris through the parks and reserves. Other attractions include the scenery of the Great Rift Valley, and beaches along the Indian Ocean. The “Big Five” animals of Africa can be found in Kenya: the lion, leopard, buffalo, rhinoceros and elephant. A significant population of other wild animals, reptiles and birds can be found in the national parks and game reserves in the country. Kenya has about 54 National Parks and reserves, and 7 Marine Parks and Reserves most of which are along the coast. 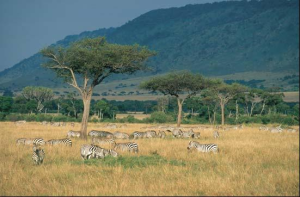 The wildebeest migration, which occurs during July through October, is considered the ‘new wonder of the world’ and has become a major tourist attraction. During the period about two million wildebeests migrate from the Serengeti National Park in Tanzania to the greener pastures of the Maasai Mara National Reserve in Kenya by crossing Mara River. Other animals that migrate at the same period include the gazelles and zebras. Activity:  What is the difference between a national park and a national reserve? Use this link to find out: http://www.kws.go.ke/content/overview-0 4. Mining
Kenya is not considered mineral-rich even though recent prospects have hinted at potential significant reserves of minerals; mining and quarrying account for less than 1% of the GDP. The Country’s main mineral export is soda ash, mined from Lake Magadi, which is located in the southernmost part of the Kenyan Rift Valley. It is used in the making of glassware, paper and industrial chemicals. Other minerals include limestone used for cement production, fluorspar, gold, gemstones, iron ore, soapstone and salt. Commercially viable reservoirs of oil and gas were identified in Turkana, in Northwestern part of the country, and off the coast in 2012, as well as a rich seam of coal in Ukambani, in Southeastern region. Physical features
Lake Victoria, the world’s second largest fresh-water lake (after Lake Superior in the US and Canada) and the world’s largest tropical lake, is situated to the southwest of the country and is shared with Uganda and Tanzania. Lake Victoria is the source of River Nile, which is the longest river in the world (6758kn or 4199 miles). The other major lakes in Kenya were formed as a result of the Rift Valley and they all lie at its bottom. The Largest of these lakes is Lake Turkana (also called Lake Rudolf) and is about 250km (155miles) long. It is the world’s largest desert lake and Africa’s fourth largest. The lake has no outlet. Other lakes in the Rift Valley are Lake Bongoria, which has hot springs, Lake Nakuru, which is a breeding ground for the flamingo, Lake Magadi, which has soda ash deposits, and lakes Boringo, Elemntaita and Naivasha.
Kenya has dozen of rivers ranging from seasonal to permanent rivers both small and large. The main rivers are the Tana and the Athi-Galana both flowing southeastward into Indian Ocean. Others are Nzoia River, which empty into Lake Victoria, Mara River, which traverses both Kenya and Tanzania and empties into Lake Victoria, and Turkwel and Kerio rivers that drain to L.Trukana.
The major mountains in Kenya are Mt. Kenya, Mt. Elgon, and Mt. Longonot all of which are volcanic mountains. Mt. Kenya is the tallest mountain in Kenya and the second largest in Africa. At 5,199 meters (17,057ft) tall, it has snow throughout the year. Mt. Elgon, which is about 4300 meters (14, 107.6ft) high, is found in the western part of the country at the boarder of Kenya and Uganda. Mt. Longonot on the other hand is found in the Great Rift Valley, and is about 2776 meters (9,107.6) tall. Landmarks and monuments
A monument is structure specially erected in remembrance if an important event or an individual. There are more than 200 monumental sites in Kenya some of which can be traced back to the time when the country was under colonial rule. They are a major source of tourist attraction.

Continue on to Activity Two, or select from one of the other activities in this module.