Kenyans have valued and participated in sports since the pre-colonial periods. This section highlights traditional and the major contemporary sports in Kenya.

Sports during the pre-colonial period (before 1895)

Early forms of sports and recreation activities were closely related to the activities that people engaged in to avail food and defend themselves against aggressors. The most prominent sports and recreation activities in most traditional Kenyan communities included: spear-throwing that was related to hunting and need for defense against hostile environments, running/racing which was geared towards meeting the need for food through hunting, swimming which was learnt due to need for fishing and communication across large rivers and lakes, and wrestling which was used as a way of identifying strong members who could be relied upon to defend their communities.

Games were also an important part of rituals, which served primarily as a religious function, for example to mark the beginning of the rainy season, the hunting or the fishing season, or of initiation rituals. For instance, when launching a new fishing boat on Lake Victoria, the Luo ethnic group used to organize a boat race to demonstrate that the new boat was better than the old ones. Some games were also carried for recreation and passing time. Although the traditional forms of games were mainly for communal survival and defense, they were beneficial in other ways such as preservation of the peoples’ culture, fostering and maintaining community/group identity, and developing character and personality traits.

Sports during and after the colonial period

It was during the colonial rule that the modern forms of sports and games, mainly of European origin, were introduced in Kenya while traditional ones were often discarded, at the encouragement of colonialist who viewed these activities as being “primitive”. The various forms of sports and games that had been popularized in Europe, North America, and Asia were imposed in Kenya, and were often played along racial lines. The British introduced tennis, cricket, rugby, and soccer in the 1920s while American missionaries introduced basketball in the 1950s. Games like rugby and tennis were strictly for whites only, and hockey was reserved for Kenyans and Indians. Sports were introduced in schools in 1925. Other than introduction of moderns sports other key milestones during this period included: the development of physical education curriculum for schools that focused on the teaching of modern sports, and introduction of competitive sports in schools, communities and at the international levels in the 1950s. Open spaces were set-aside in urban and rural areas to accommodate sporting activities.

Kenya first participated in international competitions in 1956 at the Olympic games held in Melbourne, Australia. The colonial authorities allocated some fiscal resources for the development of sporting facilities and purchase of sports equipment. For instance, the introduction of swimming programs and construction of the facilities in some schools is traced to the pre-independence period. Several national sports associations/federations to manage and administer specific sports were founded during this colonial period and continue their activities to date.

After independence, successive post-colonial governments continued to embrace and develop sports in the country. Many sports in Kenya are played both professionally and as recreational physical activities. They include soccer, athletics, rugby, cricket, motorsports, basketball, volleyball, swimming, handball, netball, baseball, shooting, bicycling, tennis, chess, wrestling, martial arts (such as boxing, karate, kickboxing), and mountain sports (such as hiking and mountain climbing). Nurturing of some sports are dichotomized along different ethnic groups and regions. For instance, the Rift Valley region s associated more with athletics, while western Kenya is identified with soccer. However, some sports such as volleyball, basketball and rugby have athletes coming from different parts of the country.

Sports continue to be popular in schools. Schools are credited with the provision of facilities, equipment and coaches who ensure that students participate in sports. However, the schools determine the kind of sports given preferential treatment. Secondary schools have been used as a medium to introduce new disciplines through their sports completion. However, some sports disciplines tend to be dominant in certain schools. Former European schools appear to put a lot of emphasis on rugby, tennis and cricket while Asian schools tend to put more emphasis on hockey and cricket.

Bullfighting is an example of a traditional sport that is still common in the country today. It is a cultural practice and a sport famous in western Kenya among the Luhyia ethnic group that conducted in some Saturdays and during public holidays. Bullfighting is a highly popular sport in Mexico, Spain and parts of Columbia. In this sport, heroic matadors (bull fighters whose task is to kill the bull) are placed in an arena to battle it out against rowdy bulls but in Western Kenya, the sport takes a different dimension as bulls are pitted against fellow bulls. The bulls that participate in bull fighting are identified while young and put on balanced diet to make them strong. They are then trained for a period of up to 3 years.

The competition is between two large bulls, which are brought together and allowed to fight for dominance of a large open field. The bullfights test the strength and prowess of the best bull raised in an individual village and this makes this a hotly contested competition. Chanting traditional war songs and poking the air above them with twigs, the residents look on as a choice bull from one village locks horns with the bravest from an “opposing” village. When the bulls meet, they lock horns and fight until one bull overpowers the other sending him scampering for safety. The owner of the losing bull parts with a cash amount that had been agreed on before the bout while the owner of the champion bull is honored and given prizes which can be in the form of money. The champion bull is escorted back to his home village accompanied by an elated crowd now chanting victory songs. You can watch a documentary on bull fighting in Western Kenya below: 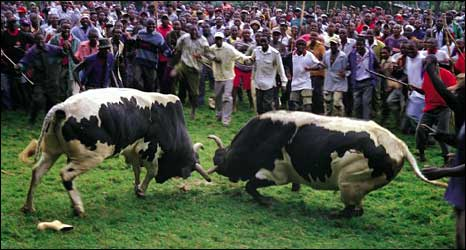 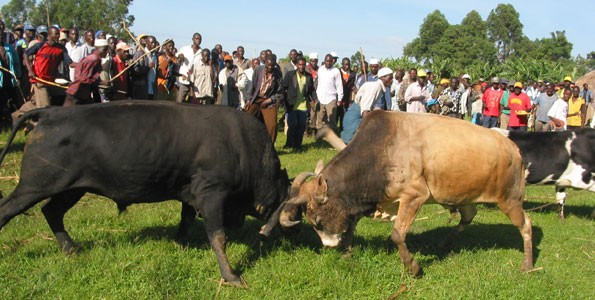 Athletics was formally organized around 1922. Kenya is renowned all over the world for its track and field athletes; the country has dominated middle and long distance races for years. Kenya’s history in track and field goes back to 1951 when the Kenya Amateur Athletics Association was formed. Soon afterward it became apparent that Kenya had a reservoir of talent which if tapped could produce world Class runners. Since the 1960s, Kenya has produced more world-class athletes, more world record holders and more Olympic Medalists in long distance running than any other country especially in 800m, 1500m, 3000m steeplechase, 5000m, 10,000m and the marathons. This is true for both men and women long-distance runners. Most of the Kenyan athletes come from the Kalenjin ethnic group. In 2014, Kenyan athletes won the New York City Half Marathon, the 2014 International Association of Athletics Federations (IAAF) World Half Marathon championships in Copenhagen, London Marathon and Boston marathon. Below is Kenya’s medal Tally in Olympic games (1956-2016) 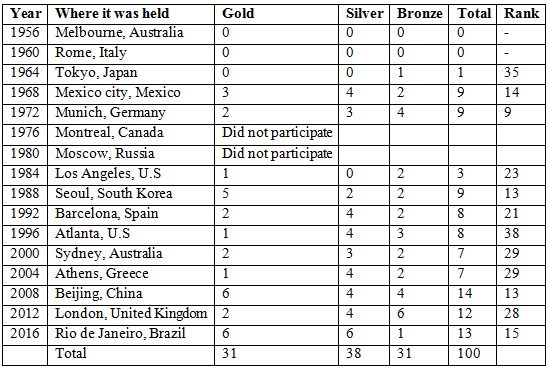 As indicated in the table, Kenya has won 100 Olympic medals since 1964 with 31 being gold medals, 38 silver and 31 bronze medals. The largest proportion of these medals (more than 90%) is in athletics although the country has also been presenting teams in field hockey, volleyball (women), swimming, shooting, weightlifting, and wrestling. Kenya’s high quality training grounds, good weather conditions and high altitude have played a big part in developing world-class athletes. There are several high-altitude training camps in Kenya that attract many international athletes.

Commonwealth games is and international multi-sport event involving the United Kingdom and other countries that were colonized by the British. Previously it was called the British Empire Games. Kenya has participated in the commonwealth games since 1958. Use the following link to state the number of medals the country has won in the table below. http://kenyapage.net/athletics/commonwealth.html 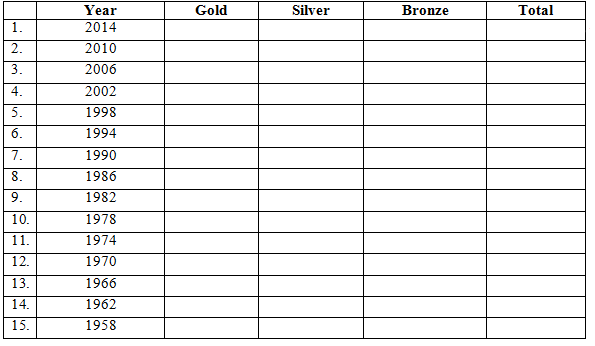 The British introduced soccer in Kenya in the early 20th century. It is commonly referred to as football and is the most popular sport in the country. The game’s popularity cuts across ethnic as well as class lines. The Kenya Premier League is the top national domestic competition, which attracts 16 teams each year. However, the national team’s performance at the regional and international level has not been impressive.

Rugby is among the most popular sports in Kenya. The first recorded rugby game took place 1909 but the game was restricted to whites only. The national team played its first international in 1955. Kenya is more proficient at playing the sevens versions of the game. And, of course, since independence in 1963 rugby is no longer segregated along racial lines. Since 2004, it has been a core member of the International Rugby Board (IRB) seven series. In 2016 the men’s rugby team won its first ever leg of the IRB seven series.

Netball is a ball sport played by two teams of 7 players each. It involves running, jumping, throwing and catching. It is similar to basketball although the rules are different: no dribbling, no running with the ball, ball must be passed in 3 seconds, ball and the basket are slightly smaller, there is no back board, and players are designated to certain areas of the court. Netball is played primarily in the UK and former British colonies (Commonwealth).  In Kenya, as elsewhere in the world, netball is played mainly by women.. The team has only participated at the continent level but not at the global stage.

Kenya is a dominant force in women’s volleyball within Africa, with both clubs teams and the national team winning various continental championships. The team has been consistent in the continent and beaten great teams such as Egypt and Algeria. In Africa it has won more than 15 African Championships tittles, including the Africa Cup World Championships and World Cup qualifier tournaments. The team has participated in Olympics, World Championships and the World Cup but its performance at the global events has not been as impressive as at the Africa regional level.

The Safari Rally is a rugged 3,000-kilometer car rally passing through Uganda, Tanzania and Kenya along public roads. It is held annually and was first held in June 1953 as the East African Coronation Safari in Kenya, Uganda and Tanzania to celebrate the coronation (ceremony of crowning) of Queen Elizabeth II. In 1960, it was renamed the East African Safari Rally until 1974 when it became the Safari Rally. The event was part of the World Rally Championship calendar for many years until it was excluded for lack of funding and organization in 2003. Since then, the event has been part of the African Rally Championship. Now it is known as the KCB Safari Rally after its sponsor, Kenya Commercial Bank (KCB) (photos).  Prior to independence the Safari Rally was restricted to drivers of European heritage.  In the years since independence the Safari has been open to drivers of all races.  In fact, Kenyan drivers of Asian heritage have distinguished themselves at the Rally. 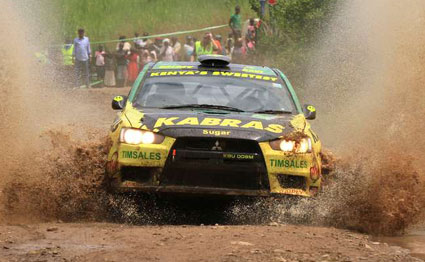 Based on what you have learned in this section, what do you think is (was) the role of sports (either traditional or contemporary) in Kenya? Make a list of possible roles.

This is the final activity in this module. Return to the curriculum, go on to Module Twenty Nine, or select from one of the other activities in this module.