Society in Ancient Egypt
In Ancient Egypt, every person had their place in a societal hierarchy. The people of Ancient Egypt formed a productive and industrious society. Below the description of each societal position is given. 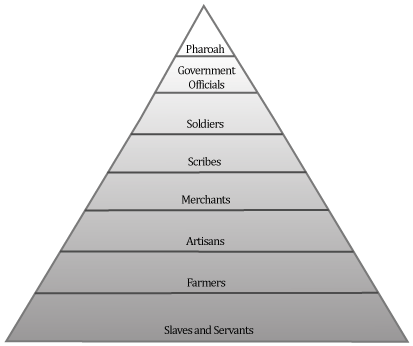 Pharaoh
A pharaoh is a title that was used to refer to a ruler (who was typically male) in the Egyptian Kingdom. These rulers were believed to be the reincarnation of Horus, an ancient god of the sky. They were considered to be part man and part god. They were the link between the mortal world and the heavens world of the afterlife. The Pharaoh had supreme power and authority during the time of their reign. Their duties would consist of preservation of order against chaos, they would order the construction of temples, and they would hear petitions, issue decrees, and would lead the country into battles. The Pharaohs also functioned as the chief priest; highest religious authority–of the land.

Government Officials (Nobles, Priests)
The officials would be responsible for the day-to-day administration. There was a hierarchy of government officials: viziers (prime ministers), local and national officials, temple priests, bureaucrats, and military men. They carried many responsibilities and functions such as: collecting taxes, settling disputes over property, recording the accounts and provisions, policing the country, and managing ceremonies at the temples and gods. Priests passed down their positions from sons to fathers often; it was a status of great power and wealth.

Soldiers
Soldiers were a part of the Egyptian army. The army consisted of infantrymen (foot soldiers who carried spears, shields and battle axes) and charioteers (archers who would shoot arrows from the chariot). The commander in chief would often be a son of the reigning Pharaoh. Divisions of the army were named after gods and could consist of up to 5,000 men each. In times of peace, the soldiers would work on government projects like transporting stone for king’s tombs or digging irrigation canals.

Scribes
Scribes were the ancient professionals who learned reading and writing and who were well educated in mathematics. They held an important function and were highly valued in society. This profession consisted solely of males. It was said to be a very difficult job and scribes would study for many years to learn to read and write. They had to be efficient in writing hieroglyphs quickly. They would use papyrus paper made from a papyrus reed. Scribes were responsible for keeping the official accounts of economic and political transactions. It is thanks to the work of these scribes that we know as much as we do about ancient Egypt. Scribes could also become accountants, doctors, government officials, and priests. Horemhab, a scribe, actually became a pharaoh!

Merchants
Merchants were very similar to traders. They traveled internationally to other parts of Africa and the Mediterranean world, trading Egyptian products like papyrus (for writing paper), gold, jewelry and linen cloth, for items like cedar and ebony (wood), ivory (tusks from elephants), animal skins, fly whisks made from giraffe tails, and non-Egyptian animals (baboons and lions) for use in temples and palaces.

Artisans
Every town and village had their own artisans. Artisans were the skilled craft workers that made the essential everyday items as well as luxury goods. They made goods such as: jewelry, coffins, tables, chests, textiles, pottery, and metal goods. They would work in large workshops and were employed by the pharaoh, government or the temples. Many of their objects are what we see in museums today.

Farmers
The majority of Egyptians worked on the land. Farmers would plow, plant and harvest, and maintain irrigation canals. In addition to producing enough to feed their own families, farmers were required to use food and other agricultural products as a form of taxes to the state. They were required to pay this food levy even in years of poor harvest when farmers did not have sufficient food to feed their own families. Many cereal crops were grown and helped to make two of their main foods: bread and beer. Farmers, who made up the majority of Egyptian citizens, were also required to work on the pharaoh’s tomb construction project every year.

Slaves and Servants
Slaves in Egypt were often prisoners of war and owned by the pharaoh. They were the lowest class in Egyptian society. As trade increased, foreign slaves became more common. Often slaves were owned by communities instead of individuals. Their work helped to improve and increase the production of goods which further improved trade. There were a variety of slaves: highly valued house servants and tutors, skilled artisans, or field laborers. Slaves were not really used in Ancient Egypt in great numbers, the pyramids were actually built from free labor -not slave labor. Slaves could be given as gifts from the Pharaoh. Ordinary Egyptians who faced economic difficulty could actually sell themselves into slavery, and then buy out of it when their circumstances improved.

Activity: Where would you fit in Ancient Egyptian Society?

If you were living in Ancient Egypt, what part of society do you think you would find yourself in? Write about what a week in your daily life might be like. Whose job do you feel was most beneficial and why? Do you think those at the top of the hierarchy had the most important role in society?

History of Ancient Egypt
Now that you have a feel for what it was like in Ancient Egyptian society, it is time to learn more about Egyptian history. Egypt has a distinct identity and culture that dates back thousands of years. Egypt, widely recognized as one of the earliest or one of the world’s great civilizations has a central place in world history. Ancient Egyptian society was influential in classical Greek and other European societies. Classical Greek scholarship credits Egypt as influential to their scholarship and culture. Though there is much Arab-Islamic influence in Egypt, culturally and historically, Ancient Egypt has been influential in and was influenced by other African cultures, societies and civilizations and served as an intersection between the Mediterranean world, the Middle East and sub-Saharan Africa. Modern Egyptians do take great pride in their history. Can you figure out why their history would be so important to them today? How does their history help their society run today or benefit society today?

Their history is important to them as a people to preserve their culture and their heritage. It is also benefits them economically due to the tourism and interest Egypt draws.

Ancient Egyptians faced many misfortunes. The country had been invaded numerous times and under foreign control often. In 1954 when President Nasser came into power he was the first native Egyptian to rule the country after 3,000 years of foreign rule. So, let’s step back in time and look at the history and misfortunes of Egypt. In the next activity, see Activity 3: The Emergence of Egyptian Modern History, we will look at the modern history of Egypt.

There are five main historical periods that divide up Egypt’s history: Prehistory, Egypt’s Dynastic Period, the Greco-Roman Period, the Archaic Islamic Period, and the Colonial Period.

Prehistory of Egypt:
This period was the time before the pharaohs and dates back millions of years until around 3000 B.C.E. when under the leaderships of the pharaohs Egypt became a centralized empire and civilization.  Recently, the bones of the second-largest sauropod dinosaur (possibly the second-largest dinosaur in the world) have been found near Giza. There is little known about this period due to the fact that it came before writing (which is what we call prehistory, history is the time in which there was writing and documentation). At that time, Egypt was not a large desert like much of it is now. The land was grassy and green with plenty of rain. It is often compared to the Everglades of Florida. People would hunt with axes and bone spears. They would learn to grow crops to add to their hunted meat diet. But climate change at the end of the last Ice Age resulted in the gradual desertification of north Africa. Egypt turned into a sandy desert as the grasslands died and turned into sand.

Egypt’s Dynastic Period:
This period is structured into many smaller periods. The table below covers each time period within the Dynastic Period itself. 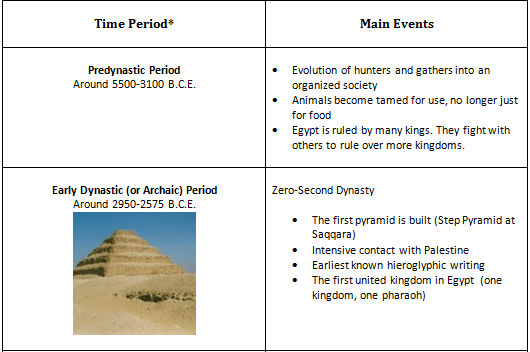 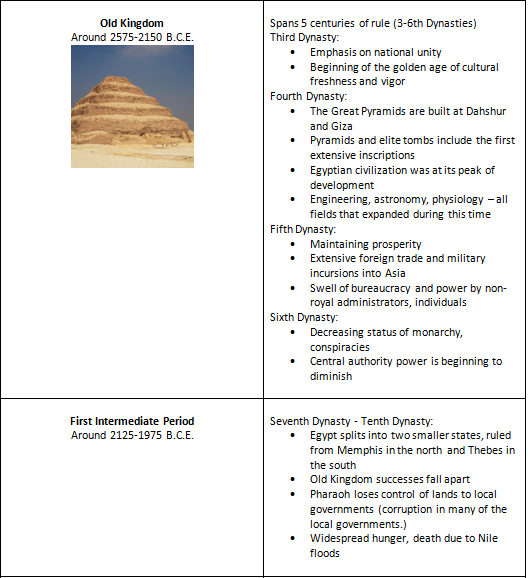 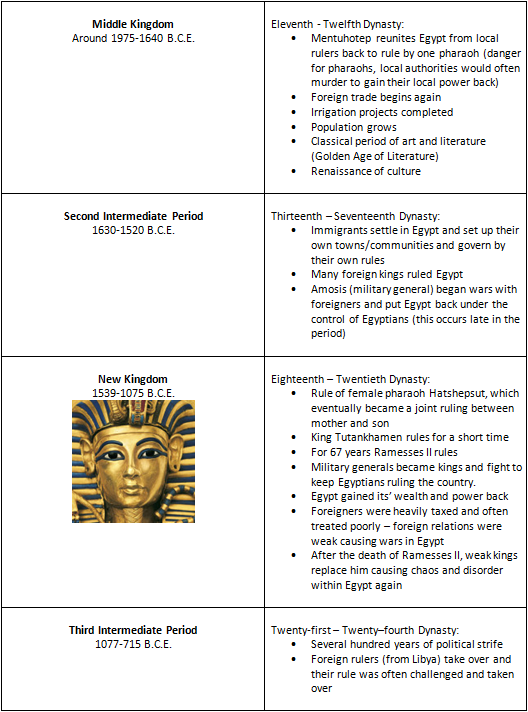 Greek rule under the leadership of Alexander the Great begins in Egypt during this period. A new capital, Alexandria, was built in Egypt. Alexander died before seeing Alexandria finished. The Greek empire split into parts at this point in time and each section of the former empire was governed separately. Ptolemy ruled over Egypt. The Greeks held onto their customs and language while adopting some Egyptian traditions and customs. During this time Cleopatra VII reigns (51-30 B.C.E.). It was at the time of her reign that Romans became involved in Egypt. A dispute over the thrown caused Cleopatra to align herself with the Romans (Mark Antony and Julius Caesar), but in the end, the thrown was turned over and the Romans took control of Egypt. Most of the Egyptians converted to Christianity by the fourth century. Egypt became an important center for Christianity. The Coptic language was created for writing the Egyptian language through the Greek alphabet and the Coptic Church was formed. Romans ruled from Rome and had a heavy military presence in Egypt. Egypt was forced to export their grains to Rome. Egyptians dislike the Romans for many of those reasons. Persians invaded Egypt in 616 C.E., and around 641 the country came under the controlled by the Arab followers of a new monotheistic religion–Islam.

Egypt’s Archaic Islamic Period (641-1790)
Egypt at this time was ruled by the Arabs. Amr ibn al-“As became the ruler of Egypt. During this time there was prosperity, peace and tolerance. Non-Muslim subjects had to pay an extra tax, while Christian Coptic Egyptians were allowed to live freely. Over centuries of this period the official language became Arabic and Egyptians began to convert to Islam. There was also a migration of Arabians into Egypt. There were many eras of rule during this Islamic Period in Egyptian History. They are each explained in more detail below. 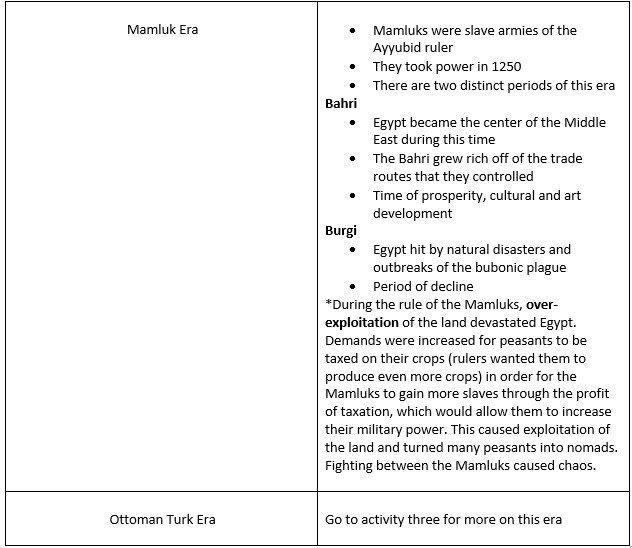 This lesson gave an overview of Ancient Egyptian history. The next lesson, Activity Three: The Emergence of Egyptian Modern History, will give the information and activities on the modern history of Egypt. Below, you will find an activity that surrounds the death of the famous King Tut (Tutankhamun).

The Mystery of King Tutankhamun Activity:

You have a chance to solve the mystery of Tutankhamun. King Tutankhamun was a pharaoh who ruled for a short period of time at a young age of ten. Though there is little known about his rule, he is very famous due to his temples that have been uncovered.  Some believe he did not die of natural causes but instead was assassinated. Below are two links of information about alleged beliefs about King Tut’s death. Look closely at the evidence and then write a case against who/what you believe killed King Tutankhamun. Feel free to look at other resources to help you make your final decision.