Introduction
There is one central problem that we must clear up before starting to talk about Nigerian history. Actually, what we know as Nigeria today only dates back to 1914, when Great Britain grouped the northern and southern regions of Nigeria into a single colony. But in this activity, we want to go much further into the past than 1914 because there were certainly people living in what came to be the colony and later country of Nigeria before that time. They just did not identify themselves as “Nigerians” or have a single government that united them. So when we talk about the early history of “Nigeria” and pre-colonial history of “Nigeria,” it must be understood that we are talking about the region that came to later be called “Nigeria.” In this activity, it is our task to give you an overview of the history of this part of West Africa before Nigeria came to be a colony and later country. We will start with the early history of Nigeria, which will cover the time period up until the 12th century C.E. Then we will move on to talk about empires, states, and global trade from approximately the 12th to 19th centuries CE—up until the time when the British began colonizing Nigeria. We are saving the colonial period under British rule, and Nigeria after independence in 1960 for Activity Three. 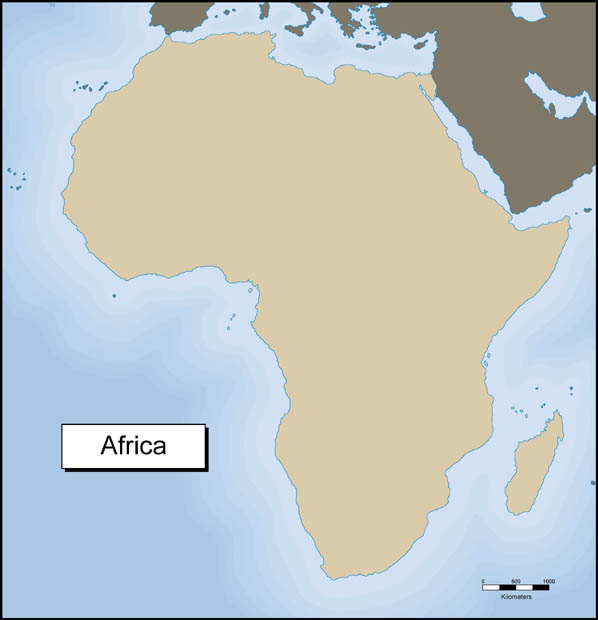 Early History of Nigeria (Pre-12th Century CE)
Earliest Peoples
Little is known about the earliest peoples who lived in the area of West Africa that became Nigeria. However, some archeological remains of human activity there date as far back as 12,000 BCE. These people are considered to be part of the Stone Age because they created and used tools made out of stone. They were hunters and gatherers, who eventually made the transition to agricultural subsistence. Later, they also started using iron, copper, brass and bronze instead of stones to make tools. In a place called Taruga in Nigeria, iron smelting began as early as the fourth century BCE. People who begin smelting iron for tools are considered by archeologists to be in the “Iron Age.” See the chart below to compare when the Iron Age began in Nigeria and other regions of the world.

Nok Culture
The earliest culture that we know about in Nigeria was in the iron age, and is called the Nok culture. What is meant by “earliest culture” is NOT that people before this did not have their own way of life with rituals and customs. Rather in this sense of the word, “culture” is a term archeologists use when they have identified specific characteristics from a particular group in a particular period of history based on the artifacts they discover. This is what happened when very distinct clay sculptures and iron tools were discovered in the 1920’s in the town of Nok, Nigeria. As more artifacts were found, it was evident that Nok culture spread across an area of central Nigeria 300 by 200 miles. Nok culture flourished from about the 4th century BCE to the 2nd century CE.

To see pictures of some of the Nok artifacts found, click on the following link:

Not much is known about the first millennium CE in Nigeria. Hopefully with more research, historians and archaeologists will be able to piece together more information about the lives of people in Nigeria during this time period. But whatever was going on at this time, it was paving the way for a period that would follow of great empires and states, and extensive trade networks.

Pre-colonial Empires, States, and Global Trade
From approximately the 12th century CE until the colonial period, the region that is now Nigeria was a collection of various empires, kingdoms, and states with elaborate networks of trade and complex political systems. This section highlights the most extensive and influential examples that rose and fell during this time period.

Archaeological evidence suggests that the first complex societies in the forest regions of West Africa (including southern Nigeria) began to form even before the 12th century CE. For example, the site at Igbo-Ukwu in Nigeria is dated to around 900 CE. But not much is known about these early societies. However, it is evident that the people at Igbo-Ukwu were involved in well-organized trade networks. As we move into the 12th century to discuss other societies in this region, it will become evident that extensive trade is central to their existence.

Refer to the map below to identify some of the kingdoms and empires that we will discuss in this section. The first three that we discuss below—the State of Ife, Kingdom of Benin, and Kingdom of Oyo—are located approximately within the territory designated “Yoruba” on the map. 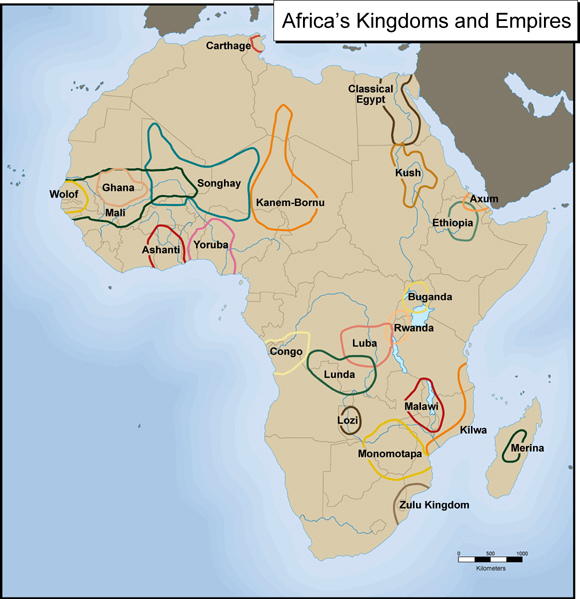 State of Ife (c.1100-1500 CE)
The State of Ife, which emerged around 1100 CE, was in the southern portion of what is now Nigeria. It was strategically located at a crossroads between the heavily forested areas of the south and the northern savannas, which helped it become an important center for trade of ivory, gold, pepper, kola cuts, and slaves. Ife reached its peak of prosperity around 1300 CE, and then declined around 1500 CE as the Kingdom of Benin (its western neighbor) rose in power.

Today there are around one million people in Nigeria who identify as Ife. They speak the Yoruba language, and come from the area of the ancient State of Ife in southwestern Nigeria. The Oni has been the Ife king since ancient times, a tradition that continues today. Below is a photo of the Oni’s palace in Nigeria in contemporary times.

Trade was very important to the strength and power of the Kingdom of Benin. People from the north of the kingdom traded horses and salt for ivory, pepper, and palm products in Benin. Trading slaves to Europeans also became an important economic activity in the 16th century (a topic we will return to in the section further below on the colonial period).

Kingdom of Oyo (c.1200-1800 CE)
Another prominent city-state (like Ife) in southwestern Nigeria that expanded into a vast empire is Oyo. It surpassed Ife in power in the 15th century CE, although Ife remained an important religious center. In its height in the 17th and 18th centuries, the Kingdom of Oyo expanded down to the southern Atlantic coast and included the Dahomey Kingdom of modern-day Benin. It was a decentralized collection of states that were administered by Oyo. Like Ife, Oyo was also strategically located to be able to control north-south trade networks.

Kanem-Borno (c. 1200-1893 CE)
The next two sections describe states and empires that existed in the northern part of what is today Nigeria. At its peak in the 16th century, Kanem-Borno expanded across not only northeastern Nigeria, but also parts of eastern Niger, northern Cameroon, western Chad, and southern Libya (see map above). The kingdom actually had merged two former kingdoms—Kanem and Borno—into one.

People in the Kanem-Borno region began converting to Islam as early as the 11th century CE. Trade networks that connected people from West Africa through the Sahara Desert to the Mediterranean Sea was an important part of this change in religion. In the 19th century, Kanem-Borno’s territory started to break apart until it was finally controlled by invading European colonial powers.

Hausa States and the Sokoto Caliphate (c. 1200 to the colonial period)
Around 1000 CE, Hausa speaking people in northern Nigeria began to organize themselves in walled cities (birni) which were ruled by a local king (sarki). By 1200 CE, some of these cities had begun to emerge into states. Islam slowly filtered into the Hausa states beginning in the 14th century CE, a little later than it did in Kanem-Borno. But like in Kanem-Borno, the spread of Islam was linked to trade with North Africa. By the 15th century, the Hausa state of Kano had become one of the most important centers of trade in Africa. Kano, seen in the photos below, remains today an important center of trade and Islamic education in West Africa.

Starting in the 15th century, Fulani people began immigrating to the Hausa states from the west, strengthening the presence of Islam in the region. In the early 19th century, a Fulani man named Usman ‘dan Fodio waged a series of jihads in the region, which led to the conquest of what is today most of Northern Nigeria (including most of the Hausa states) and conversion of the masses to Islam. The territory that he controlled is known as the Sokoto Caliphate. The caliphate actually continued throughout the colonial period through a system of indirect rule that the British designed, which we will discuss in a section further below.

At its height in the early 16th century, the expansive Songhay Empire also included a portion of northwestern Nigeria. The Songhay Empire included much of what is today Mali and Niger as well. As with all of the other empires, kingdoms and states discussed in this activity, control of trans-Saharan trade was crucial to the rise and fall of the Songhay.

Wrapping up the Pre-colonial Period
As you can see from this history, empires, kingdoms and states rise and fall, and they overlap time periods without a lot of clear boundaries. This is actually the way that history works. Various political entities competed for control of trans-Saharan trade, and some managed to coerce and conquer other groups for a time—until someone else becomes more powerful. Many, many things were going on in Nigeria before it became a single colony and later a country. What we have covered here are only a couple of the high points. So we have listed some books that you may want to look up in the library if you are interested in learning more:

You’ve just read a lot of information that covers thousands of years of history. Before moving on to the next activity, take some time to review this material by filling in the timeline below on the pre-colonial history of Nigeria.