An Introduction to the Geography of Nigeria

Nigeria is a country of diverse climates, landscapes, wildlife, cultures, and traditions. It is, in fact, the most populous nation in Africa, and has one of the fastest growing populations in the world. Nigeria is a powerhouse economically and politically in Africa; however its large population experiences everything from extreme wealth and comfort to stark poverty and hardship. Nigeria also has a diverse landscape ranging from tropical rainforests to dry savanna lands. Over 500 languages are spoken within its borders. It is truly a nation of great diversity, and well worth examining more closely! Let’s begin by talking about the geography of Nigeria.

WHERE IN THE WORLD IS NIGERIA?

The country of Nigeria, colored pink above, is found in West Africa. Nigeria’s southern edge is part of the coastline along the Atlantic Ocean (called the Gulf of Guinea), and it borders four other countries—Cameroon to the southeast, Chad to the northeast, Niger to the north, and Benin to the west.

TAKE A QUIZ ON WHAT YOU KNOW ABOUT NIGERIA
Nigeria is one country on the African continent that North Americans have often heard of and sometimes know a little bit about. But what about you? Try to answer as many of the questions below as you can. If you are not sure, make your best guess. If you have access to the web, connect to: http://exploringafrica.matrix.msu.edu/country-overview/nigeria/
and see if you can find the answers to some of the questions you do not know. Then compare your answers with the answer key to see what you know and what you still need to learn.

Fill in the Blank:

THE TOPOGRAPHY OF NIGERIA

Topography is a survey of relative positions and elevations of the land. For example, what are the highest and lowest points of elevation in Nigeria? Where do rivers lie in Nigeria? These are the kinds of questions answered by topography. The map below is a topographical map of Nigeria and some other neighboring countries. The blue and green portions of the map are under sea level, while yellow and pink are above sea level. Shades of pink (500-5000 meters) are higher elevation than shades of yellow (under 500 meters) on the map. Notice that Nigeria has a wide range of elevations. Near the seacoast, it is near sea level; but in the southeast of Nigeria, the highest mountain, Vogel Peak, reaches 2042 meters.

You have probably noticed that the measurements on this map are taken using meters, which is the metric system. Students in the United States are often not as familiar with the metric system as they are with their own units of measurements, such as feet and inches. The following information will help you convert from meters to feet, and feet to meters.

Using this information, use your math skills to make the following calculation:

Now use your web browser to do a search on the Internet to answer the following questions:

Although Nigeria does not have very tall mountain peaks like Mount McKinley or Mount Everest, it does contain a very diverse and beautiful landscape. Everything from rolling hills, to plateaus, to mountains, to river valleys, to flat farming land can be found in the country of Nigeria.

Rivers are very important to the Nigerian landscape. In particular, there are two large rivers which traverse the country and are very important to people’s livelihoods and the local ecosystem. The first is called the Niger River, which is the third longest river on the African continent. The second river is the Benue River. Locate them on the map below before continuing with this section. 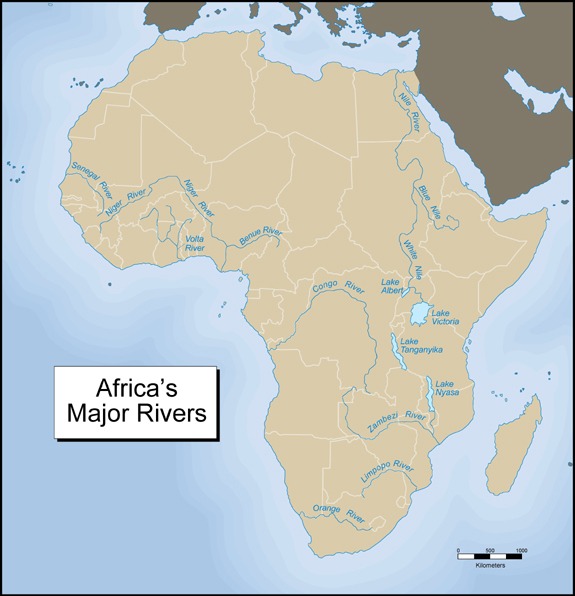 Based on the information you are given in the map above, answer the following questions:

Now, imagine for a few moments how important rivers are to the existence of people, other animals, and plants. Choose one of the following options and write a one paragraph response.

1. In what ways can a river provide basic necessities to a human being?

2. Imagine you are a hippopotamus living in the Niger River. How are your basic necessities met in the river each day?

CLIMATE, FLORA, AND FAUNA IN NIGERIA

Nigeria’s various elevations and availability of water throughout the country produce a wide variety of climates, flora, and fauna. Here, we have designated four main categories of climate, flora and fauna—mangrove and freshwater swamps along the coast and Niger Delta, tropical rainforests, tropical grassland/woodland savanna, and savanna in the north. The map below uses color to indicate how these environments change from one part of Nigeria to another.

Mangrove and Freshwater Swamps along the coast and Niger Delta
Mangrove and freshwater swamps and tropical rainforests are found in the southern 20% of Nigeria’s land. This region of Nigeria ranges in temperature from about 23 to 31 degrees centigrade (73 to 88 degrees Fahrenheit).

The mangrove and freshwater swamps in particular are found along the coast and the Niger River Delta. A mangrove is a type of tropical evergreen that grows densely alongside shorelines. The photo below gives an example of what a shoreline with mangroves can look like.

The annual rainfall in this region can be as high as 3800 mm (about 150 inches). Rainfall normally occurs here throughout the year, with no long dry season as is experienced in Northern Nigeria. Crocodiles, snakes, and hippopotami are a few of the many types of wildlife found in these wet areas.

Tropical Rainforests
Inland a bit from the waters of the mangrove and freshwater swamps lie tropical rainforests. Among some of the trees found in these forests are mahogany, obeche, and oil palms.

Unfortunately, as is happening in many parts of the world, much of this land is being cleared away for farming and logging purposes. In Nigeria, rainforest lands have been commonly cleared and used for cacao and rubber plantations. This threatens the existence of many plants and animals in this habitat. A lot of the wildlife found formerly in these forests is now found in protected wildlife reserves.

As one moves northward in Nigeria, the land becomes drier. Rainfall in the central region of Nigeria drops off significantly to about 1250-1500 mm (49-59 inches) annually. It is no longer possible to have tropical rainforests and swamp land with this amount of rain. Rather, the landscape in this region is often described as tropical grasslands or woodland savanna. Trees are much less dense than they are in the south, and there are different types of trees. Common in this region are baobab, tamarind, and locust bean trees. Much of this land today is farmed or used for grazing pastures.

One region that is slightly cooler than the rest in this middle belt of Nigeria is the Jos Plateau. A plateau is a flat area of land that is raised up to a higher elevation. Because of this higher elevation, people near Jos experience temperatures of 14 to 28 degrees centigrade (57 to 82 degrees Fahrenheit).

Savanna in the North
Even further north, towards the border of Niger and Chad, annual rainfall declines even more to between 750 to 500 mm (30-20 inches). The rains come seasonally, usually from about June to September. The rest of the year is dry—sometimes with harsh, dusty winds, called the harmattan, blowing off of the Sahara desert.

The range of temperature in the north is much greater than in the south, due to a more desert-like environment. Temperatures normally fall between 6 and 44 degrees centigrade (43 and 111 degrees Fahrenheit).

Despite slightly harsher climatic conditions, much of this land is also used for farming and grazing pastures. Smaller trees and shrubs are also common in this northern region.

Comparing Rainfall in the United States and Nigeria

The map found at the link below shows the annual average rainfall throughout the continental US. Look and see what it is in the region where you or someone you know lives. Which part of Nigeria is most comparable to the region you looked up in the US as far as total amount of annual rainfall received? Write your comparison in the box below.

POPULATION GROWTH AND THE CHANGING LANDSCAPE IN NIGERIA
Nigeria has the highest population of any country in Africa.The Facts:

Take a look at the map below. What other countries in Africa, besides Nigeria, have a population density of above 193 people per square kilometer (i.e. above 500 people per square mile) in some parts of the country? 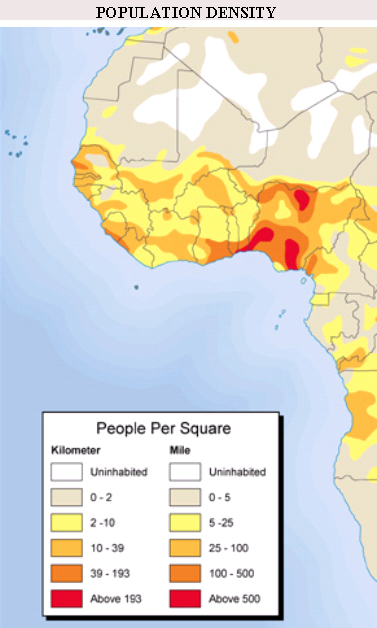 Africa countries with a population density of above 193 people per square kilometer in some parts:

The population of Nigeria is estimated at 158,000,000 people and growing at 2.45%, according to the 2010 CIA World Factbook. As can be seen by the various population densities in the map above, some areas of Nigeria have a lot of people living in a small space, while other areas have a much smaller population density. Now, compare this map with the map below that shows major cities in Nigeria. What are the names of the large Nigerian cities that appear in the red areas on the population density map?

The cities in the red areas are:

For hundreds of years, Nigeria has been a region that has had urban centers, particularly in the north and southwest, where there were highly centralized pre-colonial governments. However since the colonial period, other new urban centers have also sprung up, often based on colonial economic trade networks. The large cities that you see today in Nigeria are a combination of all these historical factors. And these cities are continuing to grow in population today.

While many people live in large cities in Nigeria today, the countryside is full of medium and small size towns as well, much the way that Canada or the United States is. Some people have been critical of the sharp distinction that is often made between rural and urban people in Africa, and the stereotypes that go along with it. For example, some stereotypes say that rural people don’t know how to read or write, are not aware of global issues, or are not able to use technology like computers or cars. Actually, these kinds of stereotypes may sound familiar to you, as they also exist about rural people in the US and Canada. For example, have you heard people from farming communities called “hicks” or “backwards?” But in reality both urban and farming communities have very intelligent and innovative people. We know that stereotypes are often inaccurate, and should not be trusted as true statements. In fact, in the case of Nigeria, many people live in both settings—rural and urban—at different points in their lives. For example, people go to big cities to look for work or to study for a period, and then they may go to a rural area to farm and live with extended family for a time. This is quite normal in Nigeria, as well as much of the rest of Africa.

After you have read through the following directions, go to www.google.com and do a search on current environmental issues in Nigeria. You might do a general search like:

Or you might do something more specific if you have a particular issue in mind already that you would like to research, based on the information in this activity. Some examples might be:

Once you have found a news article on a topic that interests you, read through it carefully and write a one paragraph summary about the key points raised in the article.