Until approximately 500 hundred years ago, the vast majority of the people in all regions of the world were directly involved in the production of food. Since the 15th century CE, innovations in agricultural production gradually led to diversification and specialization within world economies. This process eventually led to industrialization and widespread urbanization.

Historians who study the history of economic change and development report that the process of economic diversification and specialization occurred at approximately the same time in a number of African societies as it did in Europe.

An example of economic specialization and diversification comes from the Yoruba kingdoms and societies of South-Western Nigeria (see map). We will return to a more detailed history of the Yoruba and other West African kingdoms in a later lesson. From Module Seven: African History, you will remember that as early as the 15th Century C.E. Yoruba speaking peoples began to develop into centralized political kingdoms along the boundary between the savannah and forest regions of Nigeria . The most famous of these early Yoruba kingdoms were Benin and Oyo. 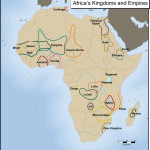 The development of these states was facilitated by changes in economic practice, particularly in agriculture. Agricultural productivity was assisted by new skills, new crops, and the introduction of stronger metal tools, which allowed for clearing and planting of larger areas of land. The increase in food production provided the opportunity for people to become more engaged in non-agricultural economic, social, and cultural activities.

The production of food surplus helped to facilitate the development of economic specialization of activities. Some non-agricultural activities, such as metal smithing that had previously been limited to times of the year when people were less busy in farming activities, could now be done on a full-time basis. With more spare time, people were able to concentrate on non-agricultural activities and greatly improve their skills. In the Yoruba societies, a number of specialized occupations developed, two of the most important being metal-smithing and textile production.

Yoruba textile production became an important economic and trade activity beginning as early as the 17th Century. Cotton was imported from the savannah regions to the north of the Yoruba areas. There were a number of specialized activities associated with this textile industry- spinning thread, dying, and weaving cloth. By the 19th Century, the Yoruba societies, along with other West African societies, had moved beyond self-sufficiency in textiles and were engaged in an active trade with other areas of West Africa.

Diversity, specialization and trade were essential to the growth of these kingdoms in four major ways.

Many societies and cultures produce wonderful art. The Yoruba cultures are no exception. As will be detailed in Module Twelve: African Art, Yoruba artisans have produced very sophisticated clay, wood, textile, and metal artifacts for many centuries. However, economic diversification and specialization provided the opportunity for the development of professional artisans.

Among the many fine examples of Yoruba art are beautiful Benin Bronze statues. The Yoruba artists who produced these statues used a special lost wax technique to produce their art. In the 19th Century, European traders and colonial officials were so impressed with the Benin Bronzes that they collected many of them and shipped them to Europe to be placed in museums. Over the past century, Benin Bronzes have greatly increased in value.

Using the internet find out as much as you can about Benin Bronzes and write a one-page report on your findings. Information that you might want to include in your report may include:

Once your teacher has looked at your work, make a final copy of your report.