In this activity, you will read about Africans in Brazil. Several questions and activities follow the reading.

How did they get to Brazil?

Brazil’s population includes the largest number of people of African descent in the entire Western Hemisphere. How did Africans get to Brazil, a country in South America? As in Mexico and India, in Brazil, Africans were transported to the country as slaves. Here, slavery lasted longer than in any other country in the New World.

When the Portuguese arrived in Brazil in 1500, 2 – 5 million indigenous Brazilians were living in the territory. The Indians and the Portuguese battled for land, and the Indians resisted against the Portuguese as they tried to enslave them. The growing Portuguese presence in Brazil after 1530 brought with it more disease and caused an increase in the number of slave raids. Many of the Indians were killed and many others were forced to migrate into the interior of the country. 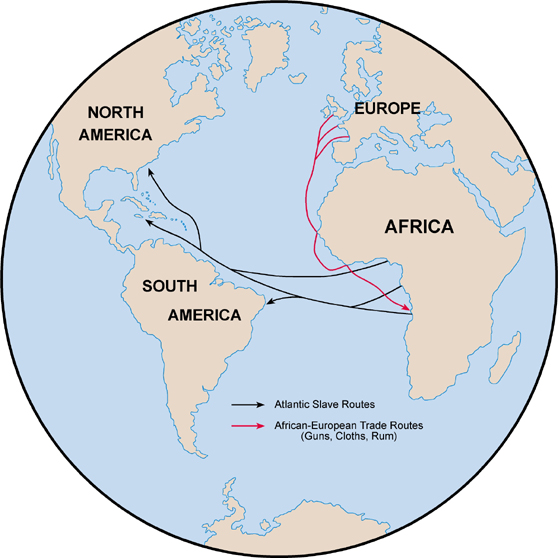 Before this time, the Portuguese had been taking African slaves from the West Coast of Africa to Portugal as early as 1433. Now, slaves were transported directly from Africa to Brazil, and the trade followed a triangular route. European goods were taken to Africa and sold. African slaves were purchased and taken to Brazil to work on the sugar plantations, and sugar was exported from Brazil to Europe.

The decline of the sugar industry in the 17th century led Portuguese colonizers operating on the coast of Brazil to go inland, and here they found gold and diamonds. These valuable products were carried from Brazil to Europe. Portuguese traders then used the money made from the sale of gold and diamonds to buy African slaves and ship them to Brazil. In the 19th century, coffee became the crop sold to Europe.

Enslaved Africans were taken from various parts of Africa and brought to Brazil. Many came from present-day Guinea and later from the Congo and Angola and the east coast of Africa. This wide-reaching trade created a diverse population of African slaves. Twice as many males as females were taken to Brazil and more adult slaves than children. Most slaves entered the country through the port cities of Salvador, Rio de Janeiro, and Santos.

Palmares: An African State within Brazil

African slaves in Brazil resisted domination and fought for their freedom and independence. Escaped slaves, or maroons, formed communities like those they were forced to leave in Africa. These free communities were called quilombos, and the most famous of these communities was called Palmares. The name Palmares is derived from the palm trees that grew in the province of Pernambuco, the location of Palmares. The community existed from 1630-1697 and fought off several attempts by Portuguese and Dutch colonizers to destroy it.

Palmares had an organized government and instituted clearly defined rules and laws. The inhabitants cultivated corn and fruit and fished and hunted. Some were traders in gold. Palmares was a safe place for run-away slaves. Those who came to the community freely, lived freely. But the community needed to increase its numbers in order to increase its power. Slaves were captured from neighboring plantations, and in order to win their freedom in Palmares, they had to bring in other captives. Running away from the community was a punishable offense.

One of the important figures of Afro-Brazilian history was Zumbi, who was born in Palmares in 1655. He was later captured during an attack on the village and placed under the care of a priest named Antonio Melo. Melo kept records and wrote about Zumbi, and most of what is known about Zumbi comes from Melo’s papers. In 1670, Zumbi ran away from Melo and returned to Palmares in 1670. Later military accounts written by the Portuguese describe Zumbi as a great fighter who protected Palmares and the freed slaves who lived there. It was not until 1694 that the village was defeated, and Zumbi and his men ran from the village. One year later, Zumbi was captured and killed by the Portuguese. Today, Zumbi is celebrated as a hero of Afro-Brazilian history who fought for the freedom of his people.

At its largest, Palmares had 30,000 inhabitants and was divided into 10 villages. Before it was destroyed, it was home to not only escaped slaves, but to other peoples of Brazil, including Indians and poor whites. Palmares was not the only maroon settlement in Brazil, but it was the largest and survived the longest.

The following excerpt is taken from a history of Brazil written in the early 18th century by Sebastino da Rocha Pitta. The history was written in Portuguese and has been translated into English. The historian describes his impressions of Palmares.

In the account, did you note the mention of Zombi? Who do you think Zombi was?

One of the points that might be worth stressing is that much of what is known about the lives of Africans living in Brazil is based on the writings of colonial authorities. As the account above demonstrates, these observers struggled to understand ways of life, peoples, languages, and practices that were very different from those with which they were familiar. This may mean that what we call history, and therefore assume to be true and accurate, may not, in fact, be completely true or accurate.

The Legacy of Slavery

Brazil was one of the last countries to end the slave trade and slavery. The end of slavery came with difficulty because the Brazilian economy depended on African slave labor. Brazil abolished the trade in slaves in 1850, and in 1888, all slaves in Brazil were emancipated, or set free. The slaves themselves took the lead in their fight for freedom by escaping slavery and organizing slave revolts. But after earning their freedom, slaves faced severe economic hardship and racial discrimination. They did not own any of the land they had worked, and immigrants who came to Brazil were often given jobs before black Brazilians.

In the years after slavery was outlawed, the white Brazilian elite launched a national program called branquemento or, in English, “whitening.” The goal of the program was to make the people of Brazil more white, and less black. How did the government do this? It encouraged white immigrants to come to Brazil and did not allow non-Europeans into the country. It also encouraged blacks to marry Europeans. Through inter-marriage, it was hoped that the population would acquire lighter skins.

There was also an effort to whiten the history and culture of Brazil. Afro-Brazilian history and culture were not taught in the schools, no national holidays recognized heroes like Zumbi, and black people rarely appeared in films, television programs, magazines or advertisements. Blacks were often denied jobs because of their race and had fewer opportunities than white Brazilians.

Another example of the discrimination against Brazilians is the government decision to exclude race as a category in the Brazilian censuses of 1900, 1920, and 1970. By excluding race from the calculations, the government erased numerical data on the black population, and effectively erased their identities from the public record. Activists and academics fought to put race back on the census form, and it appeared on the census in 1980. The figures confirmed that discrimination and racism were institutionalized in Brazil. The census showed, for example, that 44% of the population of Brazil is black, but only .87% has a college education.

The government denied the existence of discrimination and argued that Brazil was a racial democracy. Brazilians of African descent responded by refusing to allow their color, culture and history to disappear. They formed political and artistic organizations that celebrated their African heritage and identity. One of these organizations was the Black Experimental Theatre.

In 1944, Abdias do Nascimento started a theatre group called Teatro Experimental do Negro (TEN), or The Black Experimental Theatre. TEN is an example of one of the ways Brazilians of African descent displayed pride in their African origins and used art to fight for the civil and human rights of Afro-Brazilians.

The first play produced by TEN, in 1945, was an American play by Eugene O’Neill called The Emperor Jones. Other plays produced by TEN focused on themes and topics related to Africa and African culture and history. TEN also organized a creative arts contest in 1954, and in 1968, it opened the Black Arts Museum. 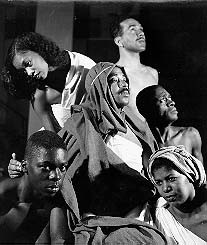 The members of TEN did not limit themselves to artistic projects. The organization was actively involved in politics. It published the newspaper Quilomobo and formed the Afro-Brazilian Democratic Committee. The Committee defended individuals who were believed to have been put in prison unjustly. TEN also created the first black woman’s association in the country, The Brazilian Council of Black Women. TEN organized the first meeting of the National Convention of Blacks. At this convention, participants wrote a bill for a constitutional amendment that defined racial discrimination as a crime against humanity.

In 1997, Abdias Nascimento, the founder of TEN, became a Senator in Brazil. He was one of the founders of the new Democratic Labour Party (PDT).

Change has been coming slowly, and after a great deal of work, to Brazil. Organizations such as TEN and the Unified Black Movement have tried to end discrimination in the work place, media and school. These organizations have also called attention to the contributions that Afro-Brazilians have made to the culture and history of Brazil.

The following questions and activities will help you understand what you have read.

1. Imagine that you are an escaped slave living in Palmares. Write a short story about what your life is like. Are you a man or woman? Do you have a family? How did you get to Palmares? Where did you live before coming to this place? What work do you do here? Do you feel safe?

Now, imagine that you are a Portuguese colonist. You have just arrived in this new country and you are writing a letter to a family member in Portugal. What will you tell them about what you see? What things seem new and strange to you? What things seem familiar? You don’t understand the language of the Indians or the Africans, so how do you communicate with them? Write a second story from the point-of-view of the Portuguese colonist.

On the web, find a map of Brazil. Study the map, either on the screen or on a printout, and locate Pernambuco, Salvador, Rio de Janeiro and Santos. According to the information you read in this module, why are these places important?