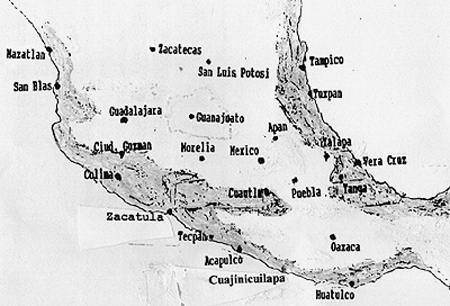 Cultural and political nationalism in Mexico has disproportionately come from the shaded regions of this map. In all this area Black Indians were over 30% of the population in late colonial census counts, and along the Pacific the percentage in places was 80% or more. Spaniards and White Mexicans were very few in any of the shaded areas.

The total population in the regions of militancy was low. There were actually many more Black Indians living in the densely populated highlands. But those highlands had much higher percentages of Spaniards and White Mexicans, i.e. more agents of European culture and political loyalty. The highlands also included regions of very high pure Indigenous population that were controlled by European power.

Within the shaded area: The finger of shade that ends near Cuautla is the great Balsas River basin, the “tierra caliente”. It extends to the west almost to Ciudad Guzman, and it is perhaps the most productive cultural and political region.

Guanajuato and Zacatecas in the highlands are two sample regions with a high number of Black Indians but also with many Spaniards and White Mexican controllers.