Map 1 (found below) has listed up to three of the most widely spoken languages in each African country. If you think back to Module 5, you will remember that these are only a few of the over 1000 languages spoken in Africa!

The languages on this map are also classified by language family. A different color is used to indicate each family. Language families are large groups of many languages that have some thing(s) in common with one another. Languages in a language family are usually thought to have come from a common origin. However, as people speaking that language moved away from each other, the language changed in different ways with each group. Eventually each group developed its own distinct new language. Also, languages are influenced by contact that they have had with other languages. Just think of how the English language has incorporated words from other languages into it; for example, English speakers use the words “siesta” from Spanish and “rendezvous” from French.

Using this map, follow the instructions below to do several exercises that will help you learn about languages and language families in Africa. 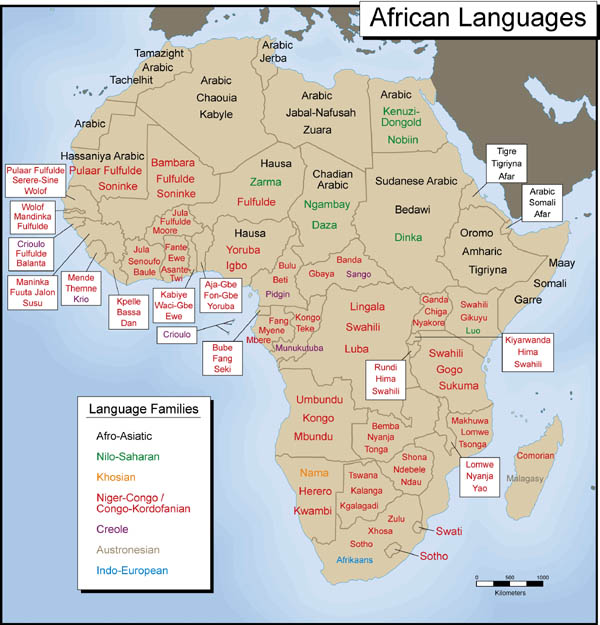 1. Which language family in Africa has the largest number of languages in it according to those listed on the map?

2. By looking at the names of the language families, do you suspect that any of them extend into regions outside of Africa? Which ones?

3. Find the corresponding language family for each African language listed below:

Go on to Map 2: Colonial Languages