This activity will introduce you to three of the great kingdoms of West Africa between the 9th and 16th centuries CE. They are the kingdoms of Ghana, Mali, and Songhay. After you have read a short text on each of these kingdoms, there is a fourth text which explains the time when parts of North Africa came to be Islamic. As you read through this activity, you should think about how the events in the four texts are related to one another. Once you have read all four texts, use the information you have learned in them to complete the graphic organizers at the end of the activity.

Use the map below as a reference while you are reading the texts. There are various links back to the map throughout the text that you can use to reference the map. The map shows the location of the three kingdoms of West Africa, as well as, many other kingdoms and empires throughout African history. 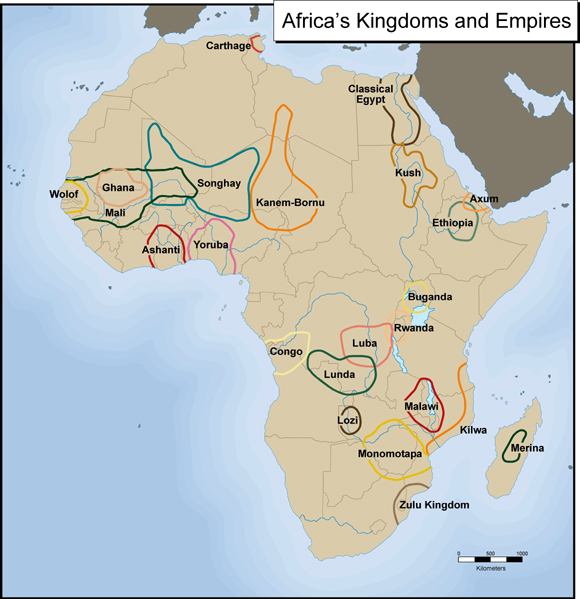 The Kingdom of Ghana

The Kingdom of Ghana is generally given the dates 9th to the 13th century CE by historians. It marks the beginning of a series of empires in West Africa that were involved in extensive commercial trade. You should note by looking at the map above that the area of the Kingdom of Ghana during this time period is farther north than the present day country of Ghana. Click here to see a map of present day Ghana.

Some have called the Kingdom of Ghana the “land of gold, ” an excellent description since it was abounding in gold. The gold trade was largely responsible for the development of Ghana into a powerful, centralized kingdom. The peoples of West Africa had independently developed their own gold mining techniques and began trading with people of other regions of Africa and later Europe as well. At the time of the Kingdom of Ghana, gold was traded for salt that came down from the Sahara desert.

In addition to the gold trade, historians have pointed to a second important factor in the development of these West African Kingdoms. This was the use of iron. The use of iron to make tools and weapons helped some people to expand their control over neighboring people. These changes called for new forms of social organization, contributing to the development of centralized, powerful empires. Historians also say that the use of the horse and camel, along with iron, were important factors in how rulers were able to incorporate small farmers and herders into their empires.

The Ghanaian kings controlled the gold that was mined in their kingdom and implemented a system of taxation for their people. Around 1054, the Almoravid rulers came south to conquer the Kingdom of Ghana and convert the people to Islam. The authority of the king eventually diminished, which opened the way for the Kingdom of Mali to begin to gain power. The trade that had begun, however, continued to prosper.

The Kingdom of Mali

Take another look at the map above showing Africa’s kingdoms and empires.  Notice the relationship between Ghana and Mali. What do you see? The Kingdom of Mali includes all of Ghana plus a lot more territory! During its time, Mali was the second largest empire in the world only after the Mongolian empire in Asia. The dates that historians have designated for the Kingdom of Mali are from the 13th to 15th centuries CE.

The founder and first ruler of the Kingdom of Mali was Sundiata Keita. We know about him through the writings of a 14th century North African historian named Ibn Khaldun. Sundiata expanded the kingdom to include the Kingdom of Ghana and West African gold fields.

The most celebrated king of Mali was Mansa Musa. He greatly extended Mali’s territory and power during his reign. He made a name for himself in distant regions throughout the Muslim world through his pilgrimage to Mecca, which is in present-day Saudi Arabia. Sixty thousand people and eighty camels carrying 300 lbs. of gold each accompanied him to Mecca.

Several great centers of Islamic learning were also established during the Kingdom of Mali. Among them were the legendary Timbuktu, Djenne, and Gao. Scholars came from all over the Muslim world to study at these places, which have a long and rich history of learning in religion, mathematics, music, law, and literature. Although many people in Mali maintained their indigenous religions during this time, Islam was becoming well established throughout the kingdom.

The Kingdom of Songhay

The first of two great rulers in the Kingdom of Songhay was Sonni Ali. He came to power in 1464 CE and made the Songhay perhaps the most powerful state in western/central Africa at the time. He seized Timbuktu and Djenne, which had been parts of the Kingdom of Mali. These, as well as the capital city of Gao, continued to be important centers of learning and commerce. Sonni Ali was not a devout Muslim himself, but was sympathetic to indigenous religious practices. Most of all, he was concerned about his own ambitions to build a great empire.

His successor was Mohammed Askia, who came to power in 1493 CE. He expanded the kingdom even further and set up an even more advanced and strongly centralized government. He developed a new system of laws, expanded the military, and encouraged scholarship and learning. Unlike Sonni Ali, he was a devout Muslim, who used the combination of Islam and commerce to build his kingdom. He brought peace and stability to the kingdom during his reign.

The Kingdom of Songhay came to an end when the Moroccans invaded and conquered them. By 1600 CE, the days of the great kingdoms of West Africa were over.

The Coming of Islam to the Maghrib

Now we are going to go back in again to the time just prior to the Kingdom of Ghana, but this time we will be looking at a region called the Maghrib.

The region known as the Maghrib lies in North Africa, in what are now the countries of Morocco, Algeria, and Tunisia. Note on the map below where the Maghrib lies in relation to the three West African kingdoms we have discussed. Think about what relationship might have existed between these two regions as you read through the text below. 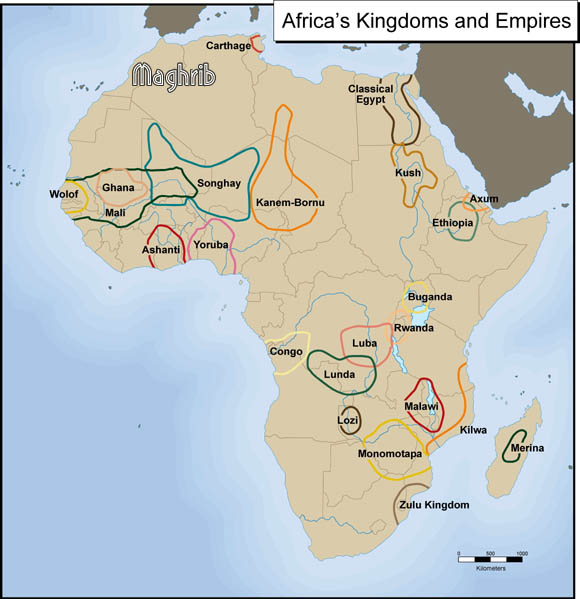 The Maghrib underwent significant changes beginning in the 7th century CE that led to a shift in its dominant religion to Islam. Before this time, the population consisted of a mix of Christians, Jews, and people practicing indigenous religions. Yet this began to change as Arabs gained more and more power in the region. The people living in the Maghrib at the time were called Berbers. Today their descendants still live in this region of Africa, and the majority of them follow Islam. During the period between the 7th century and 10th century CE (overlapping with the early days of the Kingdom of Ghana), Islam became accepted throughout this region. It remains the dominant religion there up to this day. How did this significant change occur?

Historians have explained that the Arabs brought Islam to the Maghrib as they moved into the area. The Arabs were a powerful political and military force in the region. At first, there was pressure for Berbers to join the Arab military and adopt Islam for reasons of political/economic advantage. However by the 8th century, Berbers were ready to adopt Islam as well as Arabic culture. They converted to Islam on a massive scale, but also continued to resent Arab domination in this region.

The Berbers developed their own unique expression of Islam in a doctrine called Kharidjism. This doctrine emphasized equality among Muslims and criticized the ruling authority of the Arabs. It became the Berber’s ideology of struggle against Arab domination. Their resistance was aimed not at Muslim Arabs, but specifically targeted towards the ruling class.

Beginning in the late 8th century CE, the Idrisid dynasty strengthened the presence of Islam in the region through measures to convert the remainder of the non-Islamic population to Islam. By the 10th century, virtually the whole region known as the Maghrib had become Islamic.

During this time of the Arab conquest of the Maghrib in the 7th and 8th centuries, there was an influx of Muslim merchants who became involved in the trans-Saharan gold trade with the Great Kingdoms of West Africa that were just forming around this time.

You have been asked to think about connections and relationships between the Kingdoms of Ghana, Mali, Songhay, and the Maghrib as you have read through the texts. Using the graphic organizers below, fill in one connection or relationship between each of the areas you have read about. You should write your answers on each of the six lines provided below that connect the four areas. 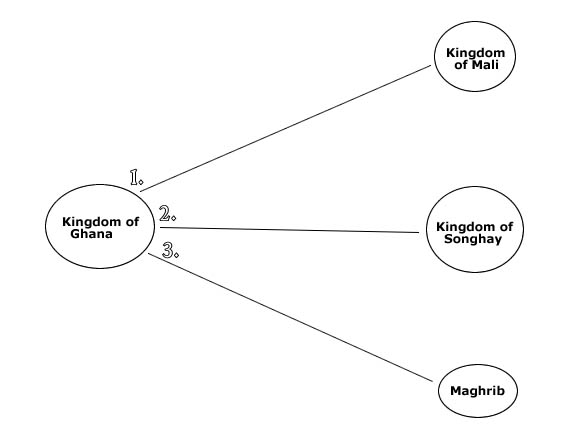 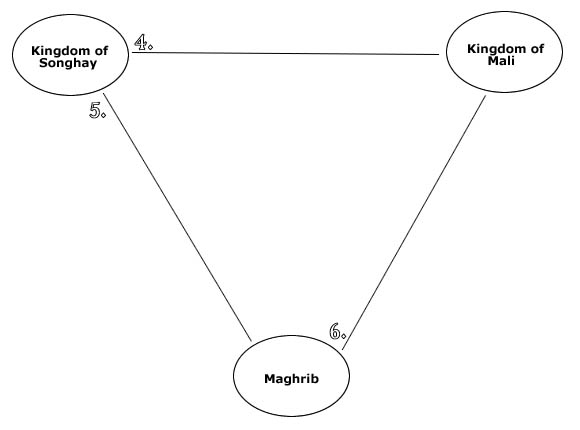 Go on to Activity Four or select from the other activities in this module: